The structure of Palamos is based on the historic city center, the area of industrial expansion, the town of Sant Joan, the coast, and the surrounding houses. The old town has its origins in the settlement built within the walls where the inhabitants lived, fearing attacks by land and sea, whether by pirates or military disputes.

The old town of Sant Joan starts with the houses and homes built around the square and the church. Sant Joan de Palamos became a municipality in 1942. The following are some of the notable features:

The port and fishing

King Pere II bought the area around the city in 1277, he wanted to have a strategic position north of Barcelona in the struggle for expansion and dominance that took place around the Mediterranean. In 1279, the same king drew up a city charter for everyone who wanted to live in the village, then known as “Palamors”.

Today, the port is one of the most important seaports in the province of Girona and has a commercial dimension alongside fishing, tourism, and culture. Not to be missed: The Fisheries Museum, housed in a former ship shed, is the first museum dedicated to fishing around the Mediterranean. The museum also has fishing boats and real floating museums that you can visit.

The Fish Marketplace, where you can watch the fish auction with the local fishermen every evening from Monday to Friday.

L’Espai del Peix is a gastronomic experience that is part of the Fisheries Museum, where you can learn how to identify, prepare and cook fish, from traditional fish dishes. There are courses, cooking shows, workshops, and tastings of typical fish dishes. The fish market is part of the municipal market, and every afternoon you can buy fresh products from the fishermen’s boats.

You can find Maritime Palamós along the coastal path that leaves the main beach, climbs to Pedró, then heads east along the coast towards Cap Roig, stopping at Calella de Palafrugell. You can see the Maritime Harbor, Morro del Vedell Bay, and the steps to Margarida Beach at the foot of Cap Gros. The path leads us to the beach of Fosca, a shallow beach in the southeast. The highlights around Castell are: The castle of Sant Esteve de Mar, dating from the 12th to the 13th centuries, is part of Palamós origins, although it ended its days as a country house.

The bay of S’Alguer is a small seaside village and is a site of national cultural interest due to its beautiful views. It used to be a fishing village and dates from the fifteenth century. It housed fishers and was a place to store fishing gear and equipment, although the area is now used for recreation. Castell Beach: This area has been isolated and well maintained, preserving the raw natural beauty. It is an example of the Mediterranean landscape in its purest form.

The village of Castell

The Iberian village of Castell: the sand stops at the cape of sa Cobertera where you can get closer to the archaeological site of Iberian settlers (dating from the 6th century BC to the 2nd century AD), discovered in 1935 during the excavation of the cliffs around la Foradada. A fisherman’s hut in the bay.

From the top of the Castell, you can see the rugged coastline: the bay of Senia, Cala Canyers with its fountain by the sea, the inlet of Corbs, and the bay of Estreta, all the way to Planes. It marks the beginning of the municipality of Mont-ras. The last cove has a restored fisherman’s hut, a traditional Catalan stone building sheltered from the north wind.

The beautiful landscape is a combination of the plains around the river Aubi, the Gavarres mountains, and the Mediterranean Sea. The Gavarres Mountains are an Area of ​​Outstanding Natural Beauty and representative of the North Mediterranean coastal mountains.

If you follow the surrounding paths, there are many things to see: The castle of Vila-Roma stands on the southern slopes of Monteagut and dates from the thirteenth century. In 1812, the French army destroyed it as they retreated, and it has gradually disintegrated ever since. In the center, there is a wall of about 10 meters, probably the remains of the tower. The Bell-Lloc Church was founded in 1272. Sant Josep Oriol gave it his blessing in 1675. The fishermen restored it, and there is an annual pilgrimage every September.

To get the best panoramic view of the city, you have several options. These are our suggestions: Plaça Murada, a natural viewpoint from which you can see the harbor and the main beach. Writers like Josep Pla and Joan Gomis have enjoyed this place in the past. The new pier and breakwater are popular spots for a stroll. Under the beacon at the entrance of the harbor, there are views of the open sea, where you can see the passing ships and see the patient fishermen.

The lighthouse offers views of Palamos Bay, Gavarres Mountains, and Arden. The best times to go are at sunset and around 7 a.m. when the boats take to the sea. The Pedró district, the highest part of the city, has the ancient architectural remains of the Augustine Monastery, which face east. The Windmill, used as an air-raid shelter during the Civil War and reinforced at the top, offers fantastic views over the Aubi River and the town of Sant Joan de Palamós.

From the top of Cap Gros

You can see the entire city from the top of Cap Gros, a nearby mountain. From the pine forest near Gori, you can see the Formigues Islands and Pallarida S’Alguer Cove as you breathe in the scent of the trees.

The pure Mediterranean. Sa Cobertera, or sa Corbatera de Castell, is the headland from which you can see the unique landscape of the beach and the plains around the castle, the last natural space on the left along the Costa Brava. Dolmen de Montagut, a high mountain that has preserved its cultural heritage, the Dolmen de Montagut, which dates back to the Chalcolithic and Bronze Ages.

Things to Do in Palamos, Catalonia 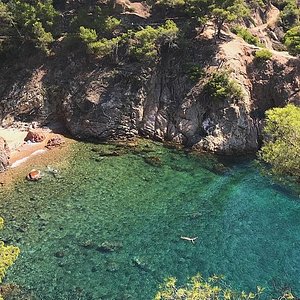 There are many exciting things to do in Palamos. The city hosts several festivals throughout the year, including the Mardi Gras, Easter Sunday swim, and traditional boat festival. Other events include the town festival of Sant Joan, the patron saint of the fishermen. If you visit Palamos during June, you can also enjoy a town festival dedicated to Our Lady Carmen. These are just a few examples of the many activities available in the town.

If you’re looking for some fun on the water, then you’ve come to the right place. Water sports in Catalonia are plentiful, from windsurfing to paddleboarding. The region is home to many unique festivals throughout the year, including the Mardi Gras festival and traditional boat festival. Water sports in Palamos are also a great way to spend an Easter Sunday. And when you’re done with water sports for the day, head to the town’s Sant Joan celebration.

If you’re looking for a place to stay in Palamos, Catalonia, you’ll find a variety of options. The Old Town is within walking distance, as are Platja de Gran and Platja del Monestri. Other attractions in the area include the Museu de la Pesca and the Port area. If you want to avoid driving, there are local buses that travel to Palamos, and there are several campsites in the area.

Whether you enjoy music or are just a beach bum, there are plenty of festivals to fit your schedule in Palamos, Spain. The colorful San Juan Festival takes place in June and the Carmen Festival fills the sea with boats in August. The summer also brings many other festivals to the town, including the local gastronomy, which features typical Mediterranean fare – fresh vegetables, rice, and olives. Here are some of the most popular.

The beaches in Palamos are located in Costa Brava, Spain, and the municipality has a population of 30,000. While the beach is a popular attraction, you can also enjoy the good nightlife and relics of the town’s Roman and Catalan past. If you’re looking for a laid-back vacation, the town’s quaint atmosphere will suit your needs. Read on to find out more about this town and its beaches.

You can find many wineries in Palamos, including Finca Bell-Lloc, where they produce both white and red wines. Tours of the vineyards are available, and you can sample local wines. Local wines are available at many restaurants in Palamos and the area’s markets. DO Emporda wines will have a prominent notation on their labels. These wines have been produced for over a century and have earned the distinction of being the best in Spain.

If you are looking for fresh seafood, you will find it in the fish market in Palamos every Tuesday. Most fish is caught locally, but you can also find some that are imported from other parts of the country. Located on the coast of Catalonia, the red prawns are prized for their vibrant color and firm meat. Fishing boats in Palamos run several boat-tasting excursions.